In this section, we will begin writing and executing short scripts in BASH.

Before we do, it’s worth reviewing and expanding on characters with special meaning in BASH.

We described some special characters in a section above. There are a few more that will come in handy when writing scripts. 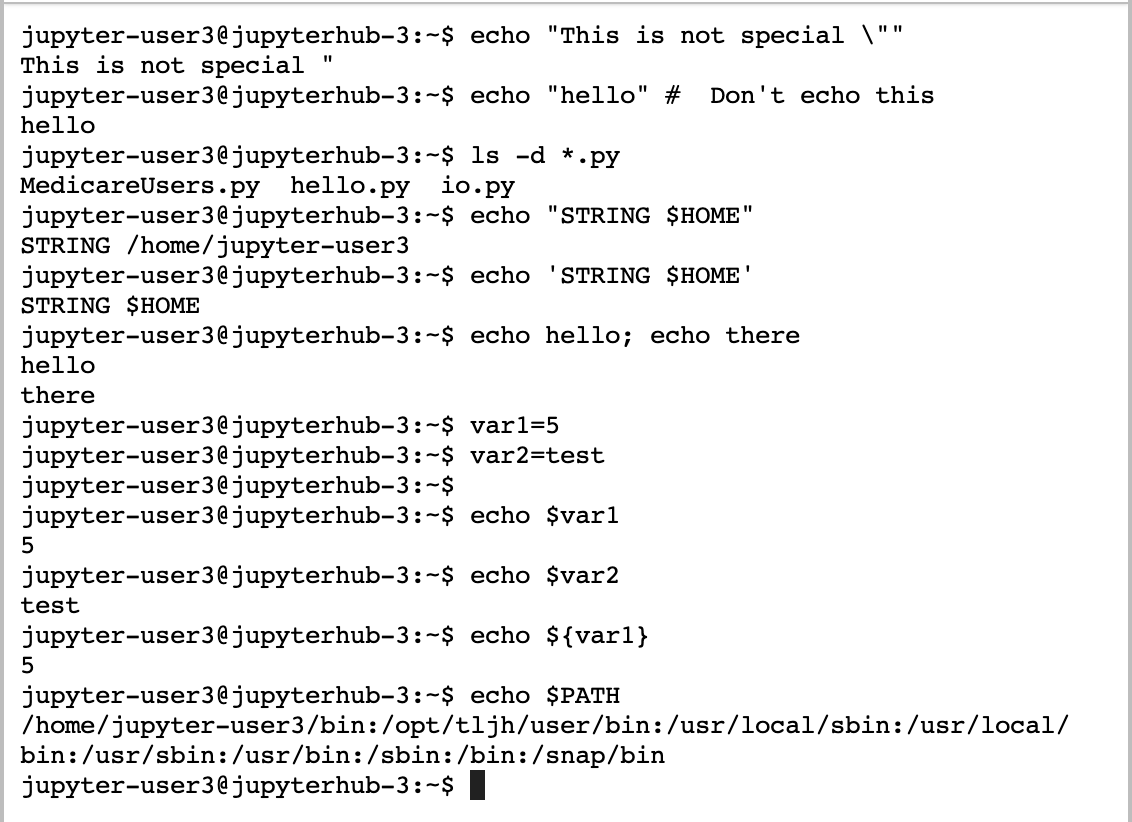 A variable is an object that stores a piece of information. There are two actions we may perform for variables: Setting a value for a variable; Reading the value for a variable. Variables may have their value set in a few different ways. The most common is to set the value directly or for its value to be set as the result of processing by a command or program.

When setting a variable we leave out the $ sign.

When referring to or reading a variable we place a $ sign before the variable name.

There are a few other variables that the system sets for you to use as well.

Enter the code editor for the script `SpecialVariableTest.sh` and paste the code below. After which, you may run the script.

Description: The script echos some of the common variables that are available in BASH

Command substitution allows us to take the output of a command or program (what would normally be printed to the screen) and save it as the value of a variable. To do this we place it within parentheses, preceded by a $ sign – $(ls) would list directories

Description: The output of the command ps -ef | grep $USER is stored in the variable $myvar. The command returns the processes that are currently running. Our outputs may look a little different from each other.

When a program is executed, the result is either sent to the standard output or to the standard error. We know that we can redirect these using the > sign. Also, a program takes in input in the form of standard input, and we know we can pipe results of one program as standard input into another program. The ability to do this is one of the real strengths of Linux. It turns out that we can easily accommodate this mechanism with our scripts also. By doing so we can create scripts that act as filters to modify data in specific ways for us.

Description: This standard input is piped in to the script and its letters are transformed to all uppercase letters

let is a builtin function of Bash that allows us to do simple arithmetic on integers (no decimals). Some operations that can be done using let are:

Description: some common mathematical operations are performed in the script using the let and expr commands

If statements (and, closely related, case statements) are conditional code that operate only when an argument is true. The test statement is found within a pair of square brackets [ ] and they can be TRUE or FALSE. We list common ones below. When we want to perform a certain set of actions if a statement is true, and another set of actions if it is false, we use the else.  If we may have a series of conditions that may lead to different paths, we use if the else if. To complete the conditional segment, the closing fi statement is used.

Anything between then and fi (if backward) will be executed only if the test (between the square brackets) is true.

Indentation is important in conditional statements. The commands must be indented by 4 spaces.

Description: The first argument from the command line is compared to the number 100. If it is larger that 100, an echo statement is printed.

Operators are important very important. There are many classes of operators such as assignment, boolean, arithmetic etc. In this module, we’ll focus on the string and file test operators, as they are specific to BASH and take a quick peak into the other classes. In later modules (Python and R), we will be using the others in greater detail.

Some core operators are found below. Based on the arguments they operate on or the function they carry out, they have been split into a few categories.

Description: Takes in a filename as its second argument. It checks the file to see if it exists and if read permissions are granted. If both the conditions are true, it echos a statement that states that the file is useful.

When you run the script below, use the following syntax:

The script useful.sh will check the permissions of your query (the second file).

There are two loops, we will work on: for and while. Essentially, you can specify a set of conditions that the script will check for. If the condition(s) are true, the script will execute the do statements.

While expression is true, keep executing these lines of code. The syntax looks like this:

Description: While the counter variable is less than or equal to 5, its value will be echoed. Once the condition is false, the loop will terminate and echo “All done”

For each of the items in a given list, perform the given set of commands. It has the following syntax.

Description: For a value in the range of 1 to 5, the value will be printed. For values outside of this range, the script will be terminated.

There are some lesser-used loops, such as select, do, and unless.  Also, one can break and continue loops.

Functions in Bash mirror scripts – they provide mini-programs in someways. You define a function and use its functionality throughout your code. They are a core concept in most languages. It gets confusing, so it’s wise to indent the body of the function.

You can define a function by using the following syntax:

Description: A function is defined to take 2 arguments as input and echo their values. To use the function, later on in the script, its name is called function_name and two arguments are provided.

Passing Variables. In most programming languages, we frequently pass arguments to functions and they are assigned to variables listed in brackets.  This is not the case in BASH and we have to manually assign them.  They are provided to the functional internal scope as $1, $2, $3…  . We may send data to the function in a similar way to passing command-line arguments to a script. We supply the arguments directly after the function name.

Returning. Most languages allow us to return a result.  BASH doesn’t do this directly but does allow us to provide a status of whether there was a success or not using return.

Description: A function is defined to take the first argument from the command line as its own argument and echo it to the screen.

Scope refers to where a variable can be interpreted.  BASH is again a little unique, and by default, variables are global within the script.  They can be made local to a function. To do that we use the keyword local in front of the variable the first time we set its value.

Setting things local is good practice.  This way variables are safer from being inadvertently modified by another part of the script which happens to have a variable with the same name (or vice versa).

Description: Var1 is defined as a local variable while var2 is not. When they are echoed, the difference in a local and global variable is seen.